Islands are magical places, each one having its own unique appeal. Whether it’s the adventure of getting there, or that land and sea seem intermingled, it is hard to pinpoint exactly what it is, but Jura is no exception to this rule. Lying just off the Knapdale peninsula on the Argyll mainland Jura is tucked in between Scarba Colonsay Islay and Gigha, and with it’s towering ‘Paps’ dominates the land and seascape for miles around. Nestling in the Gulf Stream these islands enjoy a milder climate than the mainland and this creates a favorable environment for the vast array of wild flowers and fauna that thrive here. Although in land area roughly the same size as Islay, Jura’s population is tiny at just over 200 (in comparison to Islay’s at just over 3000) – easy to see why it is commonly described as one of Scotland’s true wildernesses. It’s rugged beauty, abundant wildlife, and it’s comparative lack of people add to the magic and mystery – no wonder George Orwell was inspired to write his epic ‘1984’ here. 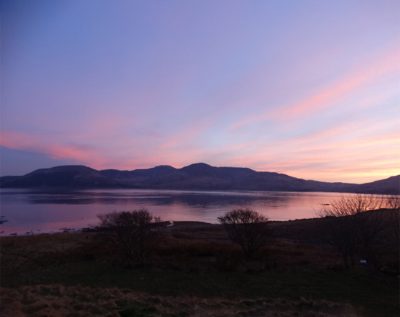 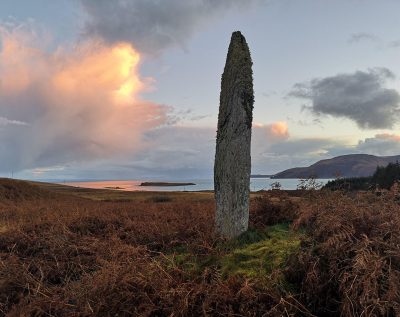 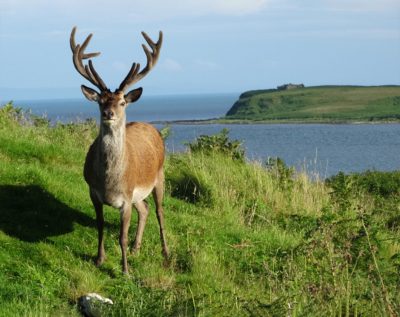 It is widely believed that the name ‘Jura’ is derived from an old Norse word dy-er, meaning island of deer – understandable when you consider there is a resident red deer population of around 5000! It is virtually impossible to visit and not see one of these majestic creatures – add to this the various birds of prey, seals, wild goats, otters and dolphins if you’re lucky – it is a fantastic place to feel close to nature. Jura’s west coast is mainly uninhabited, but is home to some of the world’s most spectacular raised beaches, and although there is no road there are plenty of walking tracks to get you out there! The famous Corrievreckan Whirlpool at the northern tip of the island is well worth a visit, especially if you are lucky enough to witness it at its roaring best when wind and tide are right. During summer months there are regular boat trips leaving from Craighouse but you can also walk the 9mls or so from where the council road ends just beyond Ardlussa, passing Barnhill (where George Orwell lived while writing 1984) on the way.